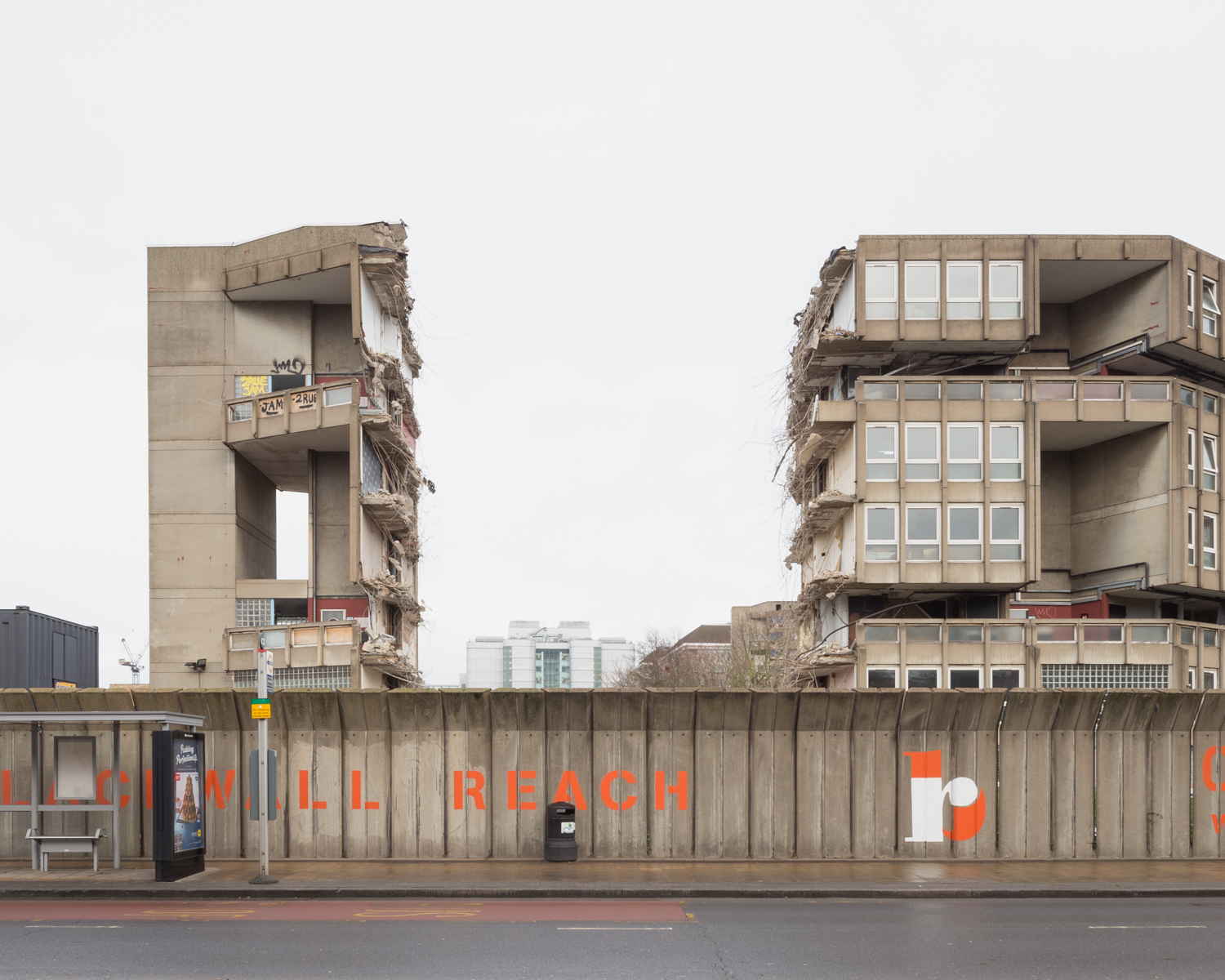 This series documents the demolition of the west tower of Robin Hood Gardens. It is framed in an ongoing wider photographic investigation about the Blackwall Reach regeneration project, which aims to follow the whole process of demolition of the old estate and the construction of the new buildings.

Completed in 1972, after being entirely demolished, Robin Hood Gardens will have last less than 50 years. When the Blackwall Reach Regeneration project is completed, part of this regeneration site will have contained four different housing schemes in less than 150 years. For reasons ranging from apparent design and construction flaws to various political and economic contexts, three different housing building typologies contained in this site have already been demolished. How will this new regeneration project be seen in 50 years from now? This series depicts the East Tower of Robin Hood Gardens in different mutated conditions, from an abandoned ruin to its complete demolition. Unexpected section cuts brutally reveal not only the different layers of the building but also the intimacy of previously inhabited interiors, introducing new information to the debate that has surrounded this regeneration project. The photographs raise questions regarding ‘if it was worth to’ and ‘how could (part of) this project’ been retained, depicting the inevitable conflict between regeneration and heritage, local character and public memory. The lack of maintenance Robin Hood Gardens suffered over decades expresses how, in many ways, the demolition of this iconic housing estate was a ‘chronicle of a death foretold’. Its detractors cast doubts over the architectural and heritage value of the project, especially after it failed twice to be listed by English Heritage. They argue that the high cost of refurbishing the buildings would have jeopardized its social housing role, often using the nearby Balfron Tower as an example. A denser comprehensive redevelopment allows to cross-fund through market housing a higher number of affordable and social housing, and increase the quality of local services and infrastructure, raising the overall quality of life of its inhabitants. The supporters of retaining Robin Hood Gardens argue that the building was not only of great physical importance but also was an outstanding and bold example of the vision of an era, which raised the living conditions of people and continues to inspire architects and urban planners around the world. All images in this post are available as archival limited edition prints. All prints are hand-signed and numbered, and come with a signed certificate of authenticity. For more information, please send an email to fibanez@estudioibanez.com.